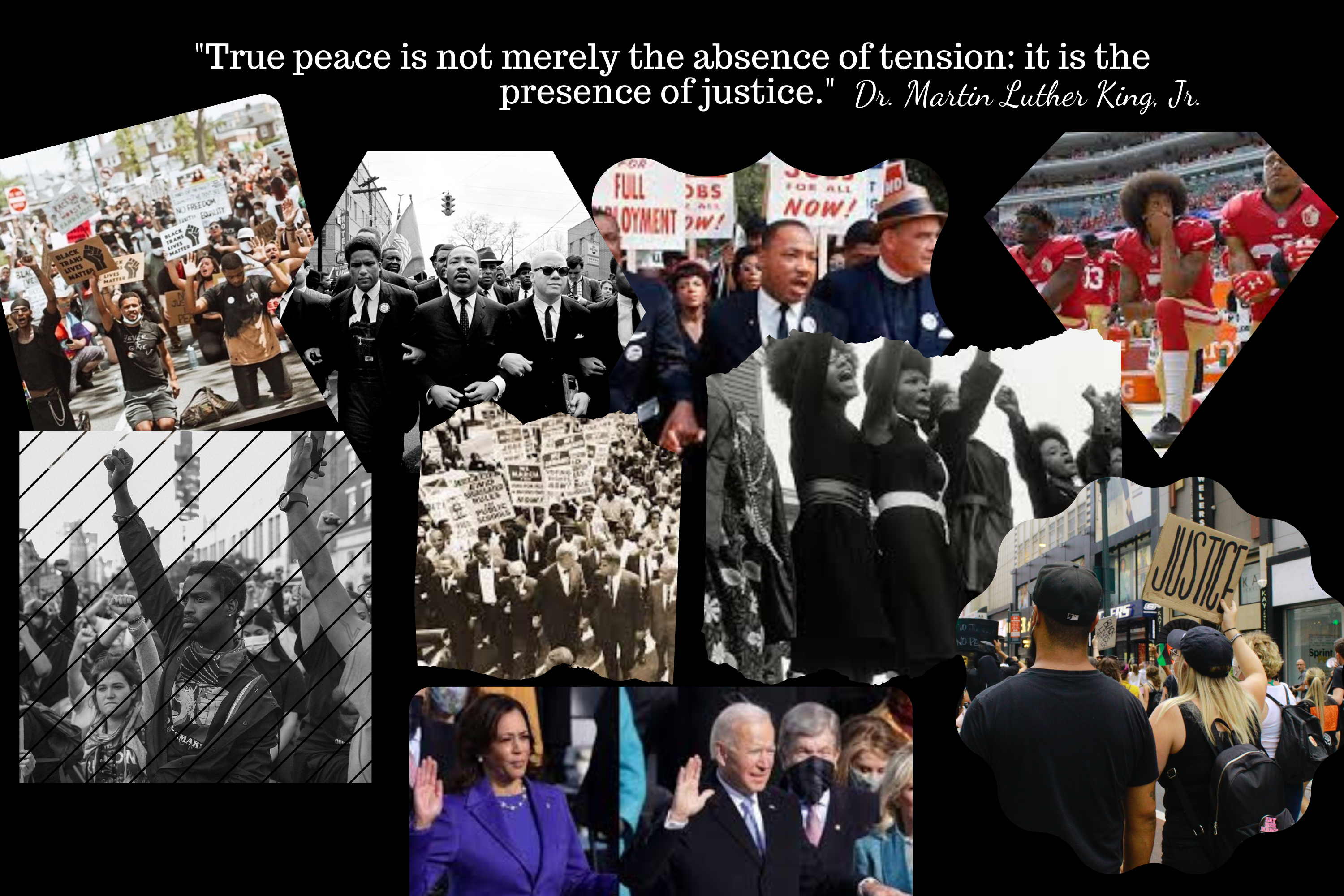 Remembering Dr. King and The First 20 Days of January 2021

As I sit here this morning, in front of my television like many people around the world, preparing to watch our 46th President's inauguration, reflecting over the last several weeks:  the assault on the U.S. Capitol, the celebration of Dr. Martin Luther King Day, and the pomp and circumstance surrounding the inauguration, I am overwhelmed with many emotions.

Let's begin with the assault on the U.S. Capitol. That assault felt so familiar. It was the first time as an adult I remember being glued to my television. I am sure many of you felt it, but for me, it took me back to the protests of the late 60s and the police forces the protesters encountered as they exercised their rights PEACEFULLY.  In my mind's eye, I saw water hoses, vicious dogs, police vans, people spitting on innocent victims, State Troopers, and so many more unbelievable scenes. Back then, protestors were often jailed for exercising their right to peaceful protest--Dr. King was jailed 29 times.

Let's fast forward to the recent insurgence, the attack on the Capitol building. I was in awe as I watched Police opening gates for the rioters to enter the Capitol, Police helping people down from the stairs, Police "greeting" rioters, and Police ask rioters to "please leave" the floor of the Senate or House. Rioters were breaking glass, beating police officers, stealing government property, and threatening Congressional members as they performed their constitutional duties. And yet, no arrests were made!   Yes, I was in disbelief. What I saw reminded me of the speech Dr. King delivered in 1967 at Stanford University titled "The Other America." Watching the events of January 6 unfold, I saw  "The Other America in 2021."

On Monday, January 18, 2021, we celebrated the legacy and life of Nobel Prize winner Dr. Martin Luther King, Jr. We spoke of his strength, his commitment, and his devotion to justice for all. We chatted and tweeted our favorite quotes and sermons of Dr. King.  Regardless of the pandemic, it was "A Day On, Not A Day Off" for many of us. We continued to celebrate the legacy of Dr. King in the manner we believed he would appreciate by making sacrifices of our time and talent for the well-being of others.  I posted one of my favorite MLK quotes: "True peace is not merely the absence of tension: it is the presence of justice." This quote resonates with me so very strongly during our current climate.

Then on Wednesday, January 20, the world watched as we embarked on a new course for our country.  While the days leading up to this day were rocky and disturbing, today was a day of pride for minorities, women, and the people of the United States of America. Don't get me wrong; we still have wounds. Our wounds were not magically healed, but today's events are encouraging.  Hopefully, we can begin to heal, and Congress can get back to doing the work of the people.

Developing confident, self-assured leaders who are versatile enough to function in any market.

We believe preparing leaders today means equipping them to be independent, well-balanced and successful.

ECS understand what it means to “add value” to others and we have witnessed and experienced the positive impact of having strong, effective leadership and the impact that results from poor leadership or an absence of leadership. We are passionate about leadership and helping others discover and maximize their leadership potential.